......Maybe, maybe not. As happens a lot lately, looking for something else I stumbled onto this one. Some would say "What's so special about a group of people on this Detroit corner?" And I do step back on occasion and ask myself what's so special about this picture or that picture? Maybe I see something that others do not. Maybe I read into many of my photographs armed with the memory of the circumstance of my being there. The memory of the before and after the shot. The memory of the elements on their way to falling in place, the anticipation just knowing that they will fall in place and the memory of the patience waiting for it. The memory of the impulse that pressed that shutter button. Of course, none of that is known to viewers of the work. To the photographer who does remember all of it, his judgement of a particular photograph may be distorted. The value of the photograph has nothing to do with the process. That's why the attempt by photographers to analyze, interpret, explain their work can sometimes lead to exercises in pseudo intellectual acrobatics. More commonly known as bullshit.

Now having said that......let me point out a few things about what I see now and a few assumptions if I may. I see 8 people clearly who contribute to the composition. Two gentlemen on the left are about to step off the curb to cross the street. An assumption can be made about why they are in this neighborhood seeing as how the Salvation Army Harbor Light Mission is near by. Since the shot was made late afternoon in the warm month of May and most everyone else is in light clothing, these two men have heavy coats on. My assumption here is that they are itinerants or locals down on their luck and may have all their possessions with them although I see only one man with a shoulder bag.

Next I see a guy hunkered down taking a smoke break possibly from his job nearby. Clean shaven, hair trimmed, a shine to his shoes and a crease on his pants. I think he knows the gentleman next to him. Maybe takes his break there often. The gentleman sitting on what looks to be a Bavarian Beer case turned on it's side seems to be selling something. A sidewalk vendor. I see an American flag on a stick and a tray of plants or flowers in front of him. His hat looks similar to those Salvation Army caps worn by the folks outside department stores with their red donation kettles. Is it coincidental that he is right there on that corner? Maybe.

The man crossing the street has left his suit jacket draped on the back of his office chair somewhere. In the mission possibly? Is he headed for the mail box to deposit a business related letter? Or is he on a dinner break because it is about that time of day and he will return to the office where his suit jacket awaits. The men loitering behind him may be just in time for their dinner break inside the mission only after, of course, attending a sermon. I know about this requirement from personal experience.

The two kids look to be just hanging out maybe waiting for someone to come out of the building that the man is entering. The late day shadows mirror the presence of seven of the main actors in this scenario.

I have no recollection of taking this specific shot. I do know what I was doing in this neighborhood not far from the downtown area of Detroit. But I have no memory of the immediate before and after. I do know I was "riding shotgun" that day shooting streetwalkers out the side window - those shots are on the same roll. And so we are stopped as commanded by the sign as are our actors. Since it's obvious the sun is setting in the West, the street is a North and South one. And I'm fairly certain it is Cass Ave. at Sproat St.

I, of course, did not see any of this at the time. And the assumptions I just leveled are just that. I could say I "saw" something and instinct and impulse took over. I like this shot for it's unwillingness to explain -- it's openness to conjecture - mine and yours. These people share this split second in time but couldn't be more different from each other. They have that in common and will never know it ...... wait a minute!! I must stop now least I dig deeper into the bullshit I warned against above - if I haven't already.

Posted by Russ Marshall Photographs at 4/26/2019 No comments:

This print of Mayor Young is included in a hand full or two of new prints. Mostly 13x19 with a few 11x14. Next meeting is May 1st. -  about 10 more days. Most are done but still have to dig around for a couple of elusive negatives. Will this one make it in? Or maybe sometime in the future.
Posted by Russ Marshall Photographs at 4/21/2019 No comments:

Agreed on title - "A Working Life: Detroit Photographs by Russ Marshall, 1958 - 2008". Looks like the main focus will be my labor, factory, industrial stuff. Nancy is thinking about a big grid with 20-30 photographs of the worker portraits. Maybe a few of the 16x20 portraits along side. There are a handful of 16x20s of the Rouge Plant that will probably fill out the wall.

The European/UK shots will find a home in the smaller gallery room adjacent to the main room. The music and night shots will be grouped. I suggested, sort of, a set of women musicians, singers and workers could work seeing as how the year 2020 will be the 100th year anniversary of the vote to admit the women's vote in elections. May not make any sense at all.

In the meantime I'm printing shots Nancy selected from Detroit Doc that she thought might be considered for either the exhibit or the exhibit book/catalog. Also have to dig up some tear sheets and get a few of my books together to take down at the end of the month.

I haven't told anyone about the exhibit next year in July except Nancy O., Pat R. and Penny M. I don't think anyone reads this blog so I'm fairly certain the secret is safe until I let it out close to the opening. 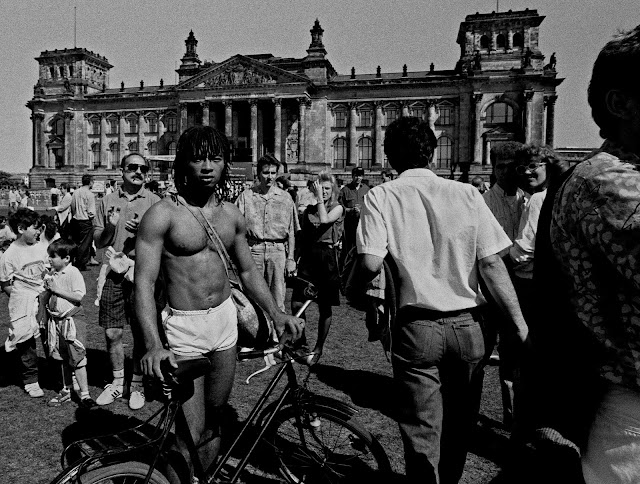 Came away with suggestions for more prints from perused pages in Detroit Doc over coffee at the DIA cafe. Also for the next meeting in mid-April, Nancy Barr needs some of the laminated pages from Solidarity's "This Working Life" features and a couple magazine spreads of Thatcher's England that were published in Solidarity and Outtakes. By the way, the actual exhibit date is sometime in July of 2020. I was thinking June of this year. She needs this stuff for the exhibit book/catalog by May 1, 2019. Some may go into the exhibit.

At this meeting a couple of days ago, Nancy had questions delving into my background for details. Mostly for now about how my interest in jazz started. Nothing yet about my first interest in photography. Also talked a little about the name of the exhibit. I'm thinking just "Russ Marshall: Photographs". I'm thinking about giving her copies of my books. She has This Working Life but the pages are falling out.

If there are a few to be printed larger than what I've provided, I'll have to take the negs to a lab in Auburn Hills, MI. Hopefully I'll be able to monitor the printing.

I've gone through and inspected all prints for flaws, density, contrast, etc 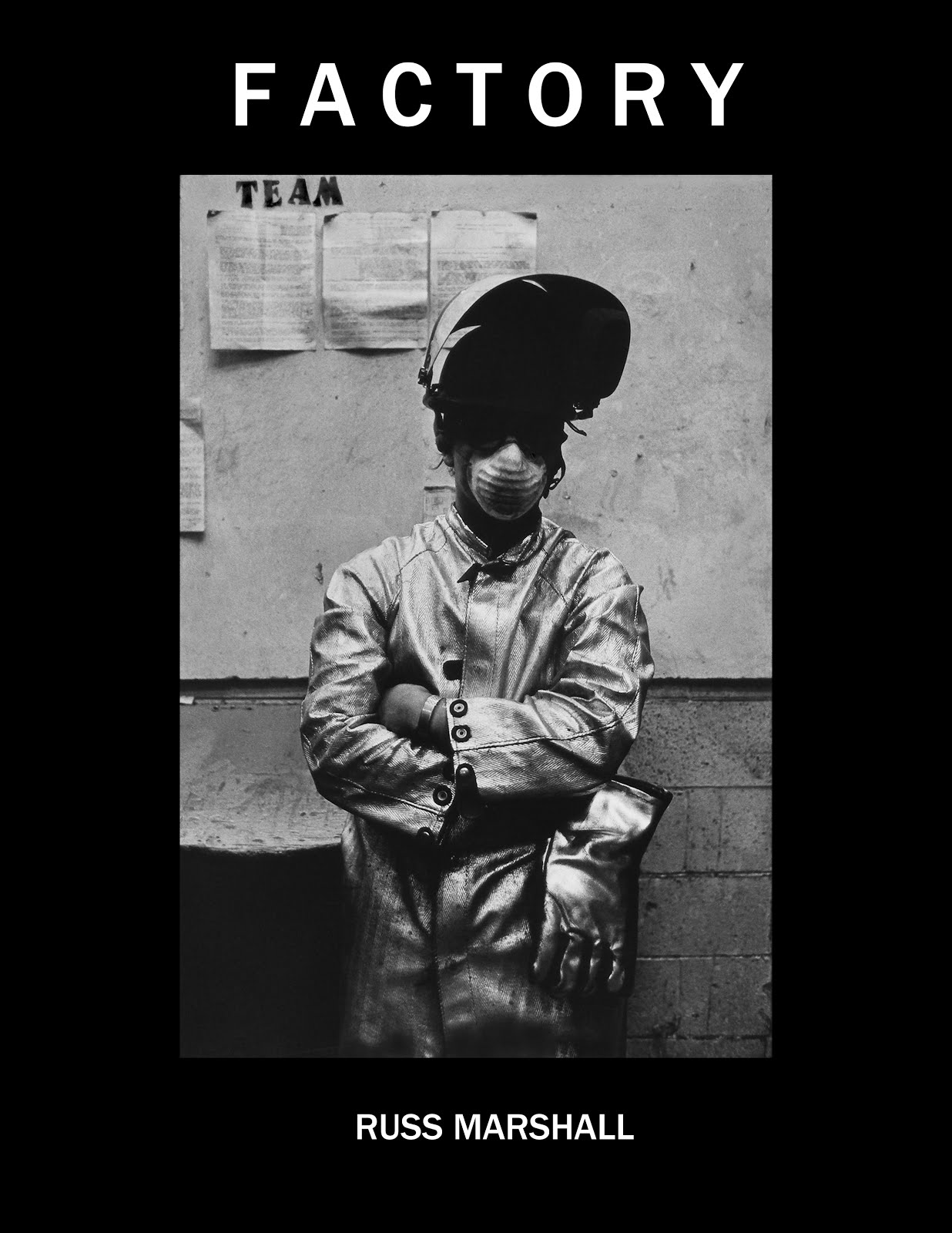 FACTORY is an 8.5x11 magazine format publication. Soft cover and perfect bound with 100 pages of 69 black and white photographs of industrial laborers in automobile factories, foundries and mills. Most were shot in and around Detroit and Michigan from 1960-2000. Others in Ohio and Pennsylvania. This is a follow-up companion publication to "THIS WORKING LIFE: Photographs of Labor and Industry, Works by Labor Writers and Poets". (2011) Both publications give voice to the mass of anonymous laborers and acknowledge that their efforts, their skills and their lives mattered and that they did exist at that time and in that place. Russ Marshall's 30 year freelance career took him from the peopled streets of Detroit's inner city to the board rooms of commerce and industry. From the jazz clubs and strip joints to the foundries and assembly lines of the Big 3. His photographs are held by universities and museums and exhibited from Maine to Mexico. CLICK on cover image to go to ETSY to order. 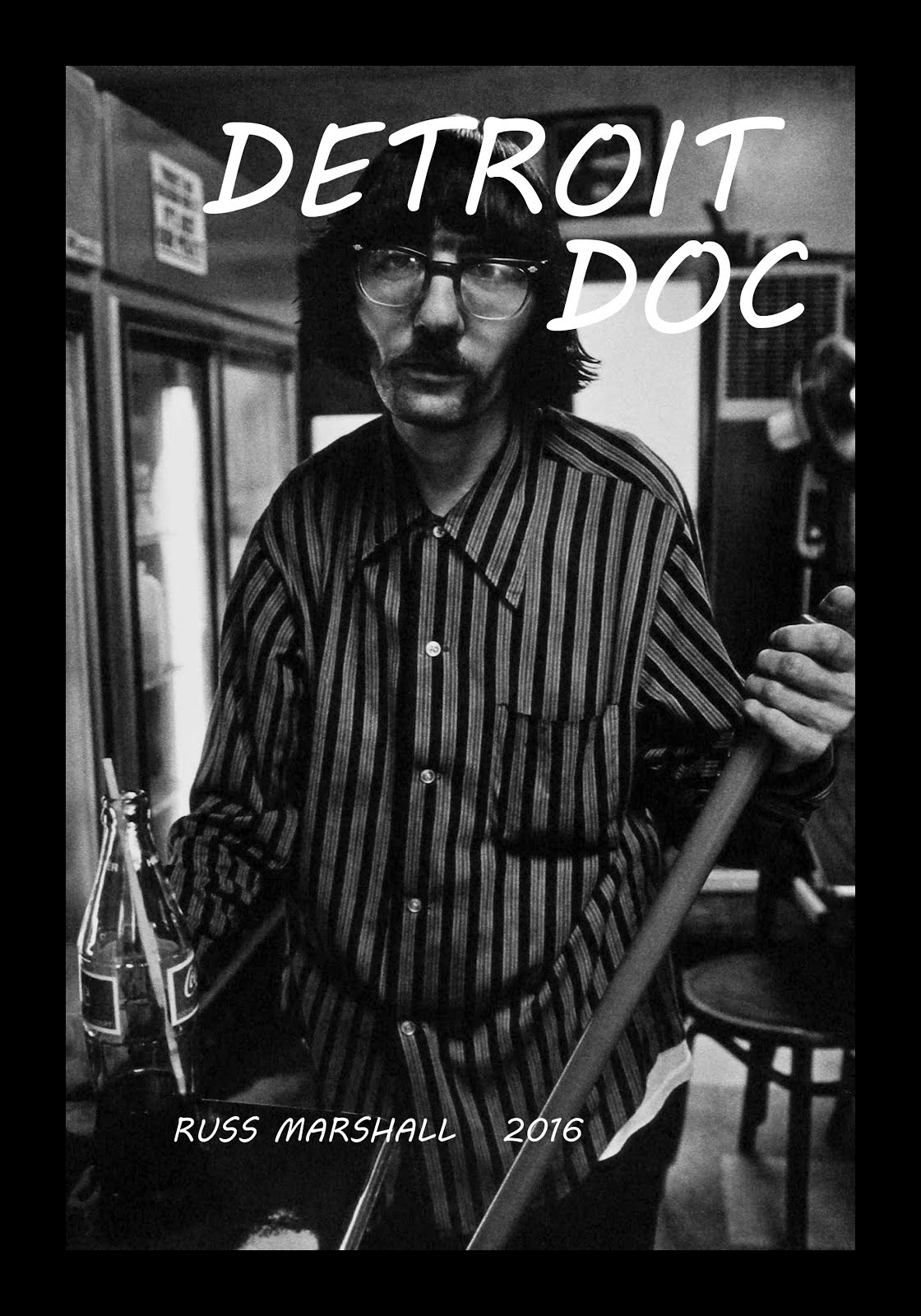 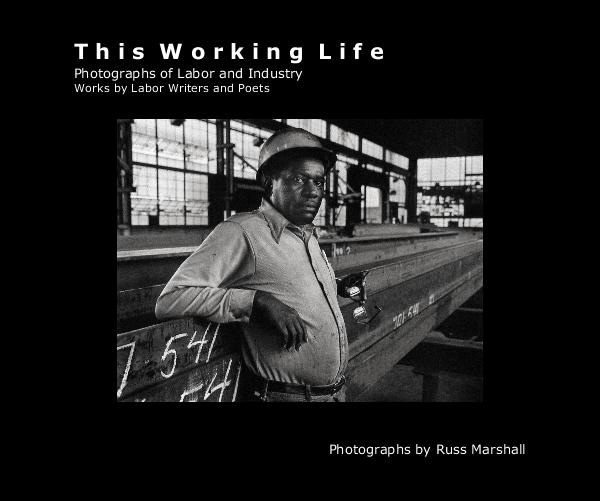 This is my new book published as of December 10, 2011 B&W photographs of industrial workers -- mostly Detroit/Michigan auto & steel -- and interspersed with poems by labor writers & poets - a few local. Offered in 10 x 8 hard or soft cover. 80 pg. CLICKING on the book cover above will take you to the AMAZON site to order the book. 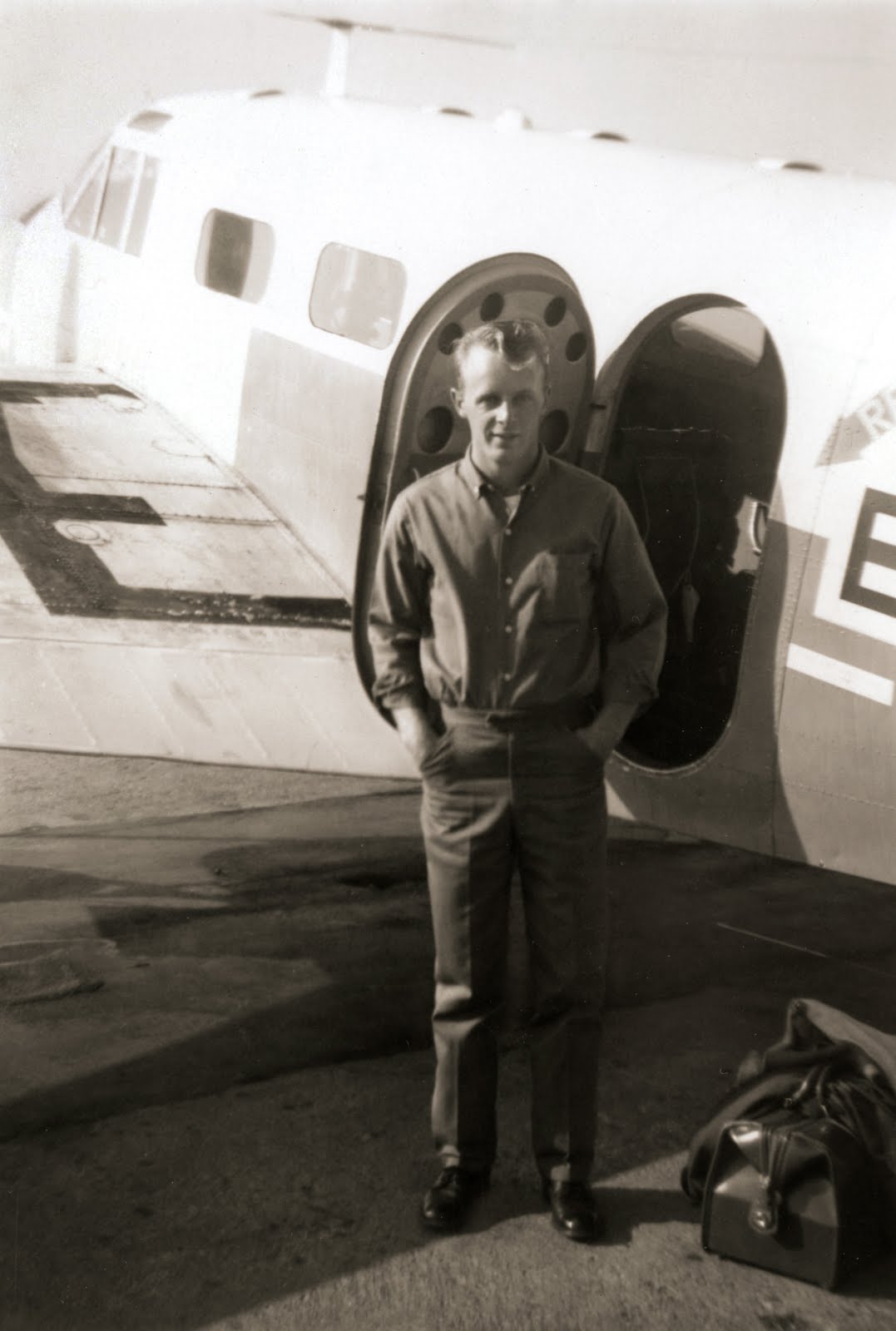 This is a 51 year look back at Russ Marshall's 4 years service in the U.S. Navy. From boot camp to duty stations in Florida, Guantanamo Bay, Cuba and Puerto Rico where he served as a Navy photographer. He was there during the Cuban Missile Crisis There are a lot of photos in this 212 pg book -- more than 200 mostly taken by Russ . Many are work related and many others show the lighter side of a bunch of 2o year old photographer sailors partying in the lab, on the beach, at USO events and on liberty trips to Jamaica, Haiti and San Juan. CLICK on the photo to go to book order site at Amazon.